Kangana Ranaut walked out of the airport today looking like she went in for a business meeting to buy the airport! A reporter was on standby right at the door and as soon as she spotted Kangu, she started asking her #MeToo questions. The media channels have going crazy since things started rolling out with women naming and shaming famous people. Reporters are not afraid at all to get in the faces of these celebrities and ask them about the #MeToo movement.

By now you know that there are two sides to an interview with Kangana Ranaut. One, where she just says what’s bothering her or what’s in her mind. Her words come out like lightning. The other side is when she gives out a sensible answer that most people would agree with. It is usually the first side accompanied by the second side. It’s as if we are talking about a coin. But yes, that is how it is with her. It’s almost as if she goes back home and think of a good and sensible answer.

The interview below has Kangana speaking out from her second side, meaning she is making sense. Without missing a beat, she told the reporter that instead of asking her over and over again, why doesn’t she go and ask Karan Johar for his opinions? Why doesn’t Shabana Azmi speak out? Yeah, why is Shabana all quiet? No more beti bachao?

Since Kangana spoke in Hindi, here’s a translation:

Karan Johar has views about gym looks and airport looks. He tweets ten times about it. What about this? This is their identity. This is their bread and butter. When the film industry is going through such an important shift, where are they?

Like us too, she is calling out KJo for being so insensitive with his Koffee with Karan. Well, not really insensitive, but something like that. She said what we were thinking because seriously, so much is going on right now and he is choosing to go through with his creepy show and on top of that, promote Raymond like if he is the only man alive!

I was seeing some promo that they have launched for this talk show. Again those same frivolous talks are going on. This one sleeping with this one, that one with that one. Making girls look like Barbie dolls, that is not done. And why men who change women like clothes being glorified? Has there been a woman who has been glorified like that.

We need to promote men who project to be a one-woman man. Somebody who pretends to be a Casanova, we don’t have to glorify that. A culture where you date a woman for 10 years and just abandon her like changing clothes. I am not judging anyone; they are all my friends and they are lovely.

And then, Kangana ends it with this:

If they are not going to participate in this major shift, why do they call themselves the messiahs of the industry?

Kangana seems to know so much about what KJo tweets about, she might be lurking around, no doubt about it. But yes, she is right about him. He has a huge platform and all he chooses to do is talk about Ranbir Kapoor! This has been going on for so many seasons now, almost as if Raymond hired Kebab Jo to be his personal PR on TV.

Granted that this episode was shot before the whole #MeToo exploded, these two ladies look really silly sitting there and acting like they are high on weed. All of these big stars being quiet about this whole thing is really suspicious. There are two plausible reasons: One, they are very much involved (as harassers or victims) and two, they are keeping quiet in the hope that this whole thing dies down. Let’s hope the latter never happens and this movement keeps growing bigger and bigger. No one has yet accused the powerful people of anything yet, so these people are all sticking together keeping quiet. It’s a shame! By the way, seeing how things are going, we have to wonder whether Kebab Jo will be his creepy self for this season as well or will he sober down the creepiness? Imagine all these questions he has been asking the ladies on the show or even the men are some of things that a few harassers have been of doing to some girls. 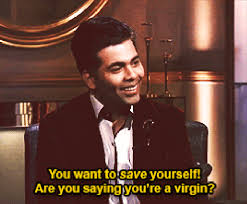 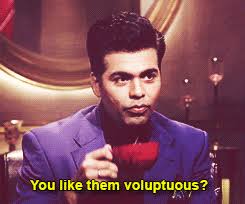 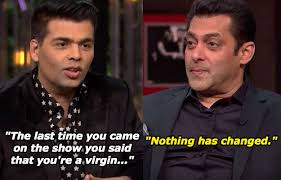 This is nothing compared to all the sex in the shower talk that was happening last season. And these celebrities are only OK with that because it’s Kebab Jo asking the questions! Let’s see if he implements the #MeToo movement in the upcoming episodes that he will shoot for. As of now, it is still sad and pathetic to see all the big celebrities keep quiet. Even the ones, who supposedly care about a woman’s dignity. This is no longer Tanushree Dutta’s battle, this involves everyone in the film industry. The least they can do is acknowledge there is a problem, but no, they are all pretending it’s not happening. At the end of the day for them, it’s all talk and no action. Perhaps we should do the same when their movies come out, talk about seeing it and then don’t show up!